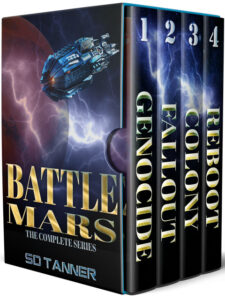 Earth is a write off. Let’s move to Mars. What could go wrong?

Over 80% of life on Earth is stolen in four weeks, leaving 8 billion humans without food, water, or even viable soil.  Weather patterns shift causing tornadoes, raging fires, and rapid freezing.  The governments quickly collapse in every country and people are stranded with nowhere to run.

It’s climate change on steroids, but this isn’t even remotely a natural phenomenon.

Book One: Genocide
Jace and his dog, Oscar, are taking care of the herd in Colorado when the biggest tornados he’s ever seen rip the earth to pieces, taking trees, cows, water, and everything else they need to live.  Across America and in every country the seeds of life are sucked up into the sky.  People are seeking sanctuary, but every door is closed until Jace meets a slick billionaire who claims to have a spaceship.

Book Two: Fallout
Titan, better known as Big Bertha, was designed as the first ship and habitat to support human life on Mars.  Billions are dying topside while Jace and his team are safe inside Bertha’s underground base, or are they?  The unfolding disaster on Earth is looking less like a natural event and more like an intentional act of terrorism, but to what end?  With two kids in tow, and a completely untrained crew, Jace is forced to make a tough decision.

Book Three: Colony
Jace and his crew make a home on Mars, but they’re not alone.  There is life on Mars, far more than anyone expected.  Unable to explain how Apollo beat him to the punch, Jace spies on his enemy looking for answers.

Truth is stranger than fiction.  If Jace and his crew don’t take control of Mars, Apollo’s plan for what’s left of mankind is a massive step backward.

Book Four: Reboot
The call to arms doesn’t go unheard and every man and woman pivots into the fight.  It’s a desperate battle across two planets for what little is left, and Jace hits Apollo with everything he’s got.  In a winner-takes-all battle, who gets to decide man’s place in Universe?  Jace gets his answer, and it’s nothing he could have seen coming.