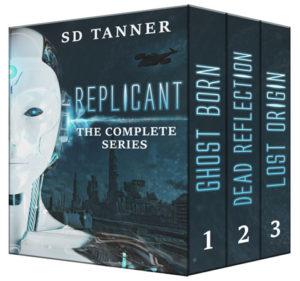 The tech was genius; armor, hydraulics and advanced vision.  Tank could have saved a lot of lives if he’d had it in the army.  Joining a mad research team called CaliTech hiding deep in Sequoia National Park, he was testing the gear with his squad, Lexie and Ark, when everything went badly wrong.

Doppelgängers intent on murdering their twins dropped from the sky like a reverse Rapture.  Other people on Earth were randomly turning into homicidal maniacs, making it impossible to pick the good guys from the bad.

A once ordered world collapsed in to chaos almost overnight, catching Tank and Lexie well outside the wire.  They’re making their way through the death zone from Albuquerque to CaliTech, but the boss has other ideas.  Dunk might be mad as they make ’em, but it’s the end of days and crazy is all they’ve got.

Tank catches a wave with a Replicant to another version of Earth.  It’s sort of like his own with a few critical differences.  The Navigator tech created by Dunk is being used to kill civilians, making the Navigators a lethal enemy of the people.

Once again Tank fights his way across his homeland, but this time he’s headed to Washington, DC.  He has a bone to pick with the President.

The only way is forward and Tank heads out to find himself caught in Hecate’s web.  His namesake, the first Tank, is on the hunt for his son, while Isaiah is determined to become the ruling triumvirate on Hecate’s Earth.

Our three Tanks are on a collision course that will change the direction of the Universe.

There is never a dull moment, or a sane enemy, in Tanner’s collection.  Happy alien hunting!