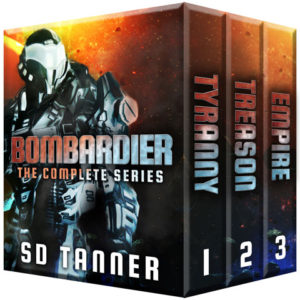 Ark is Commander of the Bombardiers, the transformed soldiers working as the United Guild’s army in space. Two hundred years earlier, aliens used mankind’s own DNA to destroy Earth. Now, the Bombardiers hunt for the enemy aliens, destroying them wherever they are.

Book One: Tyranny
Ark is preparing to take over the Bombardier army. Traveling with his mentor, Tank, he discovers the Guild is committing genocide against any planet with even a hint of enemy DNA. Learning he is part of a tyrannical empire, he must decide whether to start a war against Earth.

Book Three: Empire
Both sides have made a mistake by forgetting their true enemy. Earth is once again under attack, but Ark is in another galaxy looking for a solution. The true face of the enemy aliens is revealed, proving they have all been taken for fools.

Bombardier is an epic fight for control of the universe, filled with alien species, cool technology and politics.

We have four trilogies set in the same world, but each can be read independently.  If you would like to read them in order this is the sequence: Navigator, Bombardier, WarriorSR and Replicant.