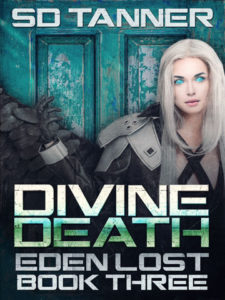 Fed up with man’s cruelty, Pax demands they rule again, leaving Ip out in the cold.  When the young Horsemen argue the toss, Gears, Pax and TL must go through the doorway to Heaven to find Ip, concluding their epic fight with Ruler.  Finally understanding why the hunters were needed, they learn their true role in the universe.

This is the last book in the Hunter Wars and Eden Lost series.

Eden Lost is the second part of The Hunter Wars series and follows directly on from part one, Hunter Wars. It can be read as a standalone series and is an exciting, fast-paced, unique take on the end of the world and the way the universe really works. Packed with great characters, humor and wild situations, it’s a ride that you won’t want to end.