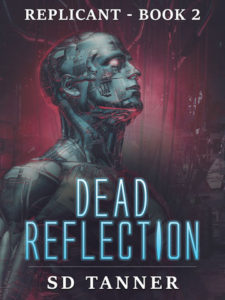 Tank catches a wave with a Replicant to another version of Earth.  It’s sort of like his own with a few critical differences.  The Navigator tech created by Dunk is being used to kill civilians, making the Navigators a lethal enemy of the people.

Once again Tank fights his way across his homeland, but this time he’s headed to Washington, DC.  He has a bone to pick with the President.

There’s never a dull moment, or a sane enemy, in Tanner’s collection and Dead Reflection is Book Two  in the Replicant trilogy.