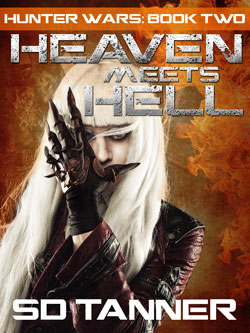 Reviews
“…it is quite simply stunning and I can’t wait for the next volume.“

“…filled with so much action and humor that I couldn’t do anything till I finished the book.“

“A great book full of suspense and drama.“

New friends are found, but the face of evil makes its presence known in the safety of their bases. Pax makes a mistake and Ip pays the price, but Gears refuses to let his new enemy rule the day.

Heaven Meets Hell is the second book in a six part series. The series is an exciting, fast-paced and unique take on the end of the world, and the way the universe really works. Packed with great characters, humor and wild situations, it’s a ride that you won’t want to end.