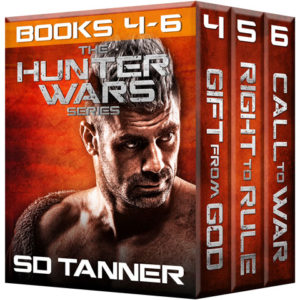 Books 4-6 of Hunter Wars, Part One of The Hunter Wars series
This omnibus edition of the Hunter Wars contains books four, five and six: Gift from God, Right to Rule and Call to War.

Gift from God
Desperate to find safe land where they can grow food, they take the drastic step of seeking safer shores. The Devil takes Pax to a place he never knew existed and Ip learns who she really is. Captain Ted makes a mistake that Gears must undo or they’ll lose everything they’ve gained.

Right to Rule
Fed up with the Devil’s play, Gears is determined to enforce his right to rule. The Devil disagrees and does something they didn’t expect, setting them back again. Captain Ted is forced to make a terrible choice and they stand to lose more than they gain. The land is dying and hunger grips their world.

Call to War
Gears witnesses the impossible and they learn there’s more that the Devil can do. Faced with disaster, he calls the game to an end and prepares for a final battle. Mankind must make their true intent known or all will be lost for a thousand years.